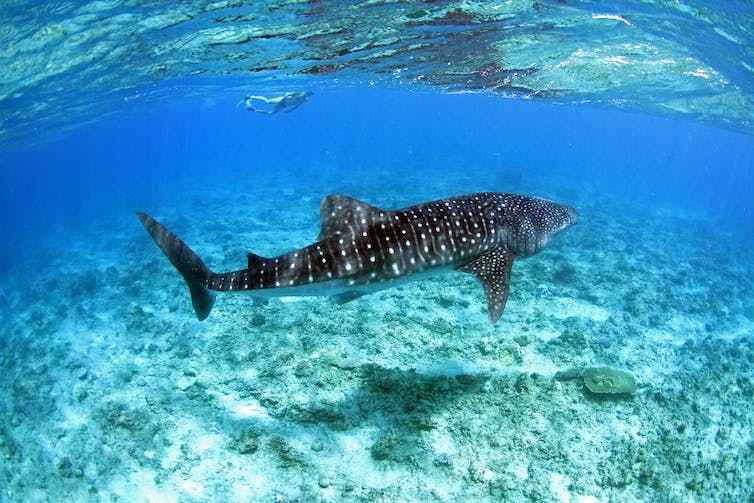 A whale shark basking in the Maldivian shallows

By Joshua Copping and Bryce Stewart

The whale shark is the largest fish in the world, but much of its lifecycle remains shrouded in mystery. These giants gather in just a handful of places around the globe – something which has long baffled scientists – but our new research has started to explain why. A better understanding of whale shark movements could help prevent further population loss in a species that has already experienced a 63 per cent population decline over the past 75 years.

When swimming solo, the whale shark, which can grow up to 18.8m in length and 34 tonnes in weight, travels all over the world. Recently, a group of scientists tracked the remarkable journey of one whale shark across the Pacific from Panama to the Philippines. At more than 12,000 miles it proved to be one of the longest migrations ever recorded.

Yet whale sharks are known to come together at just a few specific locations around the world. Anything from ten to 500 whale sharks may gather at any one time in areas off the coasts of Australia, Belize, the Maldives, Mexico and more. 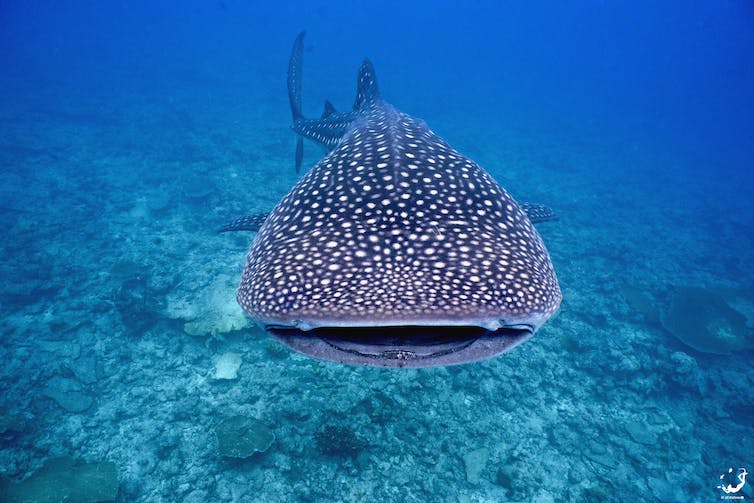 Approximately 20 hotspots have been identified – mere pinpricks in the vastness of the world’s oceans – but we don’t know what exactly attracts the whale sharks to them. In some cases the sites are linked to a specific biological phenomenon – such as the spawning of land crabs at Christmas Island in the Indian Ocean, which provides whale sharks with the seasonal equivalent of a Christmas feast. Our new research aimed to discover whether there was something else that united the places where these giants of the ocean hang out.

It’s all about bathymetry

The physical features of these spots – known as their bathymetry – have been shown to influence gathering points in other marine species. So in collaboration with the Maldives Whale Shark Research Programme, we decided to investigate whether it drives whale shark gatherings in the same way.

Our new global study shows that whale sharks congregate in specific areas of shallow water, next to steep slopes that quickly give way to areas much deeper water (usually between 200m  and 1,000m).

We identified three main reasons. First, the deep water is used by whale sharks for feeding. Studies have shown the sharks diving to depths of almost 2 kilometres (1,928m to be precise) to feed on zooplankton and squid. 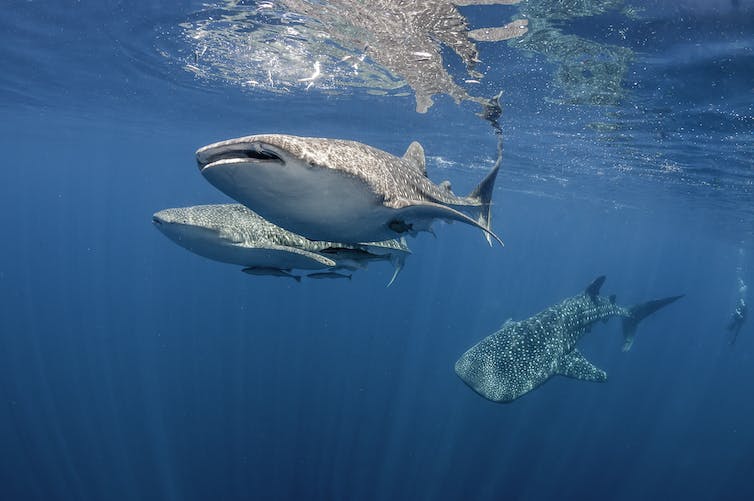 A group of whale sharks feeding near Indonesia

Second, the steep slopes are known to bring nutrients up to the surface from the deep, which in turn increases the abundance of plankton and attracts large numbers of filter feeding species. And finally, in shallow water, as well as feeding on coral and fish spawn, the sharks are able to thermoregulate, warming themselves back up after their dives into deep water which gets as cold as 4℃.

If you’ve ever seen or swum with a whale shark, it was most likely in one of these relatively shallow aggregation areas. Knowing where these hotspots are has provided local communities with a windfall from ecotourism. In the Maldives alone, economic benefits from whale shark-related activities were estimated at US$9.4m per year. Whale sharks are worth a lot more alive than dead – and with many of these meeting points in developing countries, the income is invaluable.

But with the increasing pressures of tourism comes new dangers for the sharks. Crowds of snorkelers and tourist vessels are increasingly disturbing the whale shark’s waters, and – more worryingly – risk potentially fatal strikes by boats. To protect these beautiful creatures and continue to reap the rewards of ecotourism, we recommend that marine protected areas should be set up around whale shark gatherings and codes of practice be followed when interacting with them. 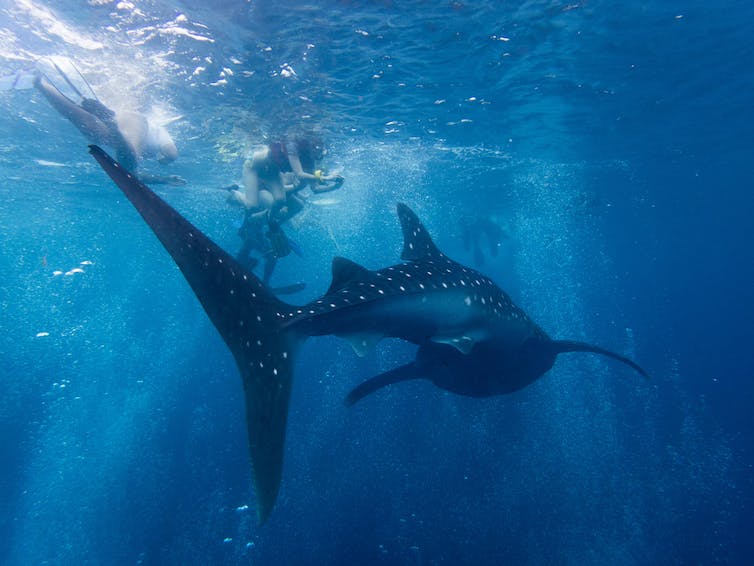 Whale sharks are imposing, but feed on krill and other plankton. MWSRP, Author provided

These discoveries have narrowed down some of the key reasons why whale sharks congregate where they do, but many mysteries remain. Do individuals travel between these hotspots? Coastal gatherings are predominately made up of immature male sharks, usually still just four or five metres long. So where are all the girls? And where do whale sharks mate and give birth? Mating and pupping have never been seen in the wild – but, intriguingly, up to 90 per cent of the whale sharks passing through the Galapagos marine reserve are female and thought to be pregnant.

Could this be a key labour ward for the world’s whale sharks? Last year a BBC film crew at the Galapagos attempted to follow a pregnant female in a submersible to watch it give birth, but to no avail. That’s one secret that the depths are keeping for now.